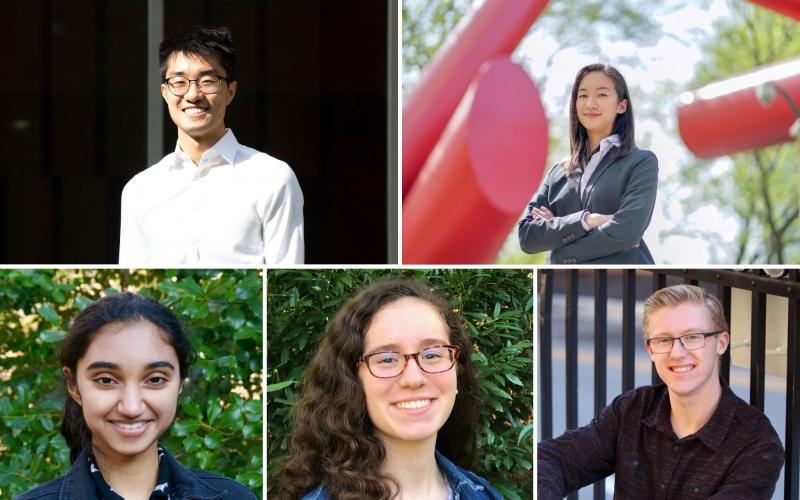 They are among the 417 students named 2022 Goldwater Scholars from the 1,242 students nominated by 433 academic institutions in the United States, according to the Barry Goldwater Scholarship & Excellence in Education Foundation. Each scholarship provides as much as $7,500 each year for as many as two years of undergraduate study.

Penn has produced 23 Goldwater Scholars in the past seven years and a total of 55 since Congress established the scholarship in 1986.

Joshua Chen is majoring in materials science and engineering in the School of Engineering and Applied Science and entrepreneurship and innovation in the Wharton School. He is conducting research in the physics department under Marija Drndic at Penn and with the Juejun Hu Research Group Photonic Materials Lab at the Massachusetts Institute of Technology. Chen received the 2019 Bosch Scholarship Award and Littlejohn Undergraduate Research Award. At Penn, he is a Rachleff Engineering Research Scholar, the software head at Penn Aerial Robotics, and the founder and president of the new MatSci Makerspace. Outside Penn, he is a founding board member and head of growth for Wave Learning Festival, a nonprofit started during the pandemic to offer free online courses taught by college students to middle and high schoolers. He is a co-founder of Repairylene, a startup in the prototype phase that employs electroplating technology as a metal-repair solution. Chen plans to pursue a Ph.D. in material science and engineering with the goal of developing scientific research innovations that will change technology.

Allison Chou is majoring in neuroscience and minoring in chemistry in the College of Arts and Sciences. She works in the lab of Sigrid Veasey at Penn’s Perelman School of Medicine, focusing on the mechanisms of pre-plaque neural injuries in sleep loss and Alzheimer's disease. She also has worked with Rebecca Robbins of Harvard Medical School and Brigham and Women’s Hospital on examining sleep beliefs and habits among elderly Chinese and Bangladeshi Americans. Chou transferred to Penn after her first year at Brandeis University. At Penn, Chou is a University Scholar and a teaching assistant for the course Chronobiology and Sleep taught by David Raizen at Penn Medicine. Chou is the founder and co-president of Penn Chinese Calligraphy and the operations director at TEDxPenn. She helps organize Sleep Well at Harnwell workshops with guidance from Adriana Perez in Penn’s School of Nursing to raise awareness on the importance of sleep. She volunteers at Beyond Taiwan, mentoring high school students in Taiwan with limited resources on applying to U.S. colleges. Chou plans to pursue an M.D./Ph.D. in neuroscience to continue her research in sleep and Alzheimer's disease.

Shriya Karam is majoring in systems engineering with a concentration in decision science and a minor in mathematics in Penn Engineering. She has been an advocate for integrating equity and inclusion in her academic work in transportation and engineering and in advocacy organizations outside the classroom. At Penn, she is a research assistant at the Center for Safe Mobility where she is developing an equity-focused aviation accessibility model. She also is president of the Underrepresented Student Advisory Board in Engineering and is a board member for Penn’s Society of Women Engineers. Karam plans to pursue a Ph.D. in civil engineering.

Laila Barakat Norford is majoring in bioengineering with minors in computer science and bioethics in Penn Engineering. As a Rachleff Scholar, Norford has been engaged in systems biology research since her first year. Her current research uses machine learning to predict cell types in intestinal organoids from live-cell images, enabling the mechanisms of development and disease to be characterized in detail. At Penn, she is an Orientation Peer Advisor, a volunteer with Advancing Women in Engineering and the Penn Society of Women Engineers, and a teaching assistant for introductory computer science. She is secretary of the Penn Band, plays the clarinet, and is a member of the Band’s Fanfare Honor Society for service and leadership. Norford registers voters with Penn Leads the Vote and canvasses for state government candidates. She is also involved in Penn’s LGBTQ+ community as a member of PennAces. Norford plans to pursue a Ph.D. in computational biology, aspiring to build computational tools to address understudied diseases and health disparities.

Andrew Sontag is a Benjamin Franklin Scholar majoring in physics and astronomy with a concentration in astrophysics and is pursuing submatriculation to earn a master's degree in physics in the School of Arts & Sciences. He has conducted research with the Johns Hopkins University Applied Physics Laboratory concerning charged particle interactions near Saturn, which has resulted in a recent first-author publication. While working with the physics lab of Penn’s Jay Kikkawa, Sontag discovered a novel method for producing laser beams with significantly more stable angular momentum than previously attained. He serves as a site coordinator for the Penn Music Mentoring Program, a student volunteer group for music education. Sontag plans to pursue a Ph.D. in physics to research high energy quantum interactions.

The students applied for the Goldwater Scholarship with assistance from Penn’s Center for Undergraduate Research and Fellowships.